By KirstenMay 27, 2022Commentary, Community Events, COVID-19, In the News, Participants
No Comments

Message from the Director

Welcome to the new normal. COVID case numbers have surged again, but our research continues to push forward and our researchers have enthusiastically resumed in-person activities that have been few and far between over the last two years. This includes attending and holding scientific conferences, generally through hybrid formats, allowing those comfortable and ready to reconvene in-person to present new data, exchange ideas and forge new collaborations.

Our progress is made possible by the hard work of our investigators, the critical contributions of research participants, and the generosity of our dedicated supporters (p 5). And we are committed to sharing all that we are learning through innovative platforms produced by our UCI MIND team (p 7). 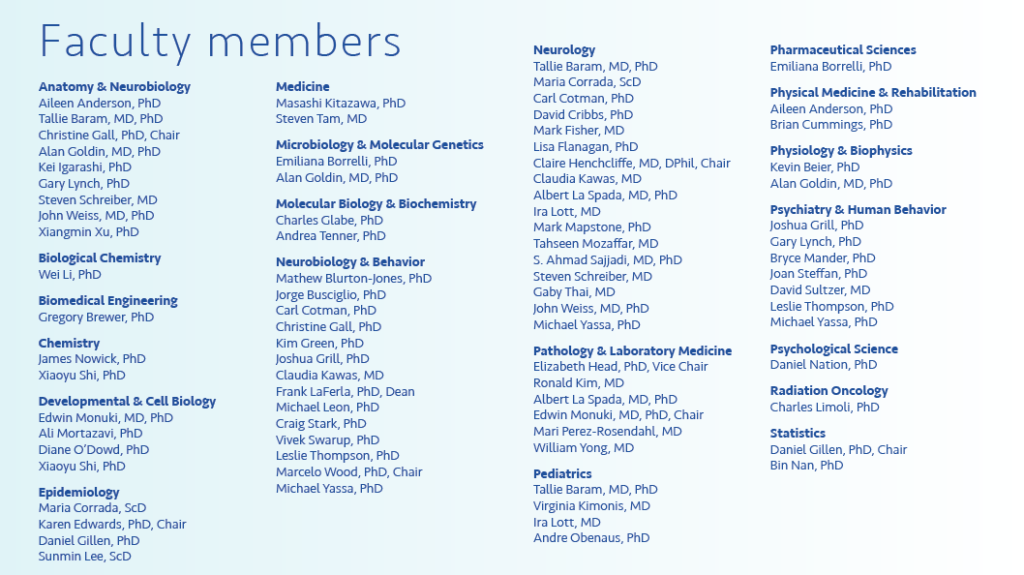 The role of microglia in Alzheimer’s disease 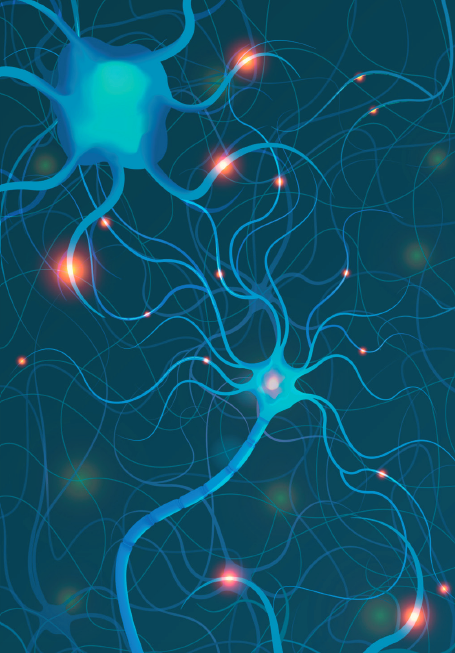 Alzheimer’s disease (AD) is classically characterized by the appearance of beta-amyloid (Aβ) plaques and hyperphosphorylated tau tangles. More recently, however, microglia, immune cells within the brain, have been implicated in the development and progression of AD.

In the healthy brain, microglia have a variety of roles, from maintaining proper connectivity via synaptic pruning to removing cellular debris and protecting against potential insults. In AD, however, certain types of microglia shift from helping the brain maintain normal function to responding  to a dysfunctional disease state.

Microglia activate an inflammatory response and attempt to surround and remove Aβ plaques. Studies have shown that attempts by microglia to protect the brain by degrading and clearing Aβ plaques from the brain are futile. Consequently, microglia chronically secrete inflammatory molecules such as IL1β, IL-6, and TNFα, which may contribute to neuronal cell death in AD. This begs the question: are microglia good or bad in the context of AD?

The answer is not so simple. One emerging theory suggests that the microglial response in AD may be more complex than once thought. For example, microglia may be helpful early in the disease but harmful as the inflammation they cause becomes chronic. Additionally, multiple distinct subsets of microglia exist in the AD brain, suggesting that different microglia types may perform different functions in the disease. 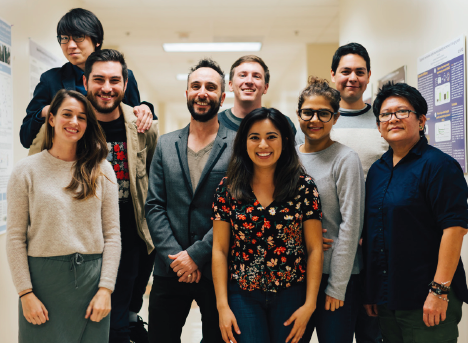 Professor and Vice Chair of Neurobiology and Behavior, Dr. Kim Green, studies the multifaceted roles that microglia play in the pathogenesis and progression of AD. Some of his lab’s work focuses on using novel genetic techniques to manipulate the microglia that specifically surround the Aβ plaques. This approach allows for a nuanced examination of the inflammatory processes that occur in certain cell subtypes. Preliminary data look promising and it is hoped that this approach can be used widely by other researchers to further advance microglial research.

In April, the Centers for Medicaid and Medicare Services (CMS) released their final decision related to coverage for the monoclonal antibody against beta amyloid, aducanumab (Aduhelm®). The decision includes only a few changes from the preliminary recommendation announced January 11. The decision remains that CMS will pay for aducanumab under a coverage with evidence determination (CED). This means that the drug will only be covered when a person with Mild Cognitive Impairment or mild dementia is enrolled in a randomized controlled trial. Such trials will need to be approved by CMS and could be funded by NIH or other sources. As evidence of what a major issue this decision was, CMS received more than 10,000 comments during the public comment period. According to CMS, the majority of comments supported the preliminary CED decision or requested CMS not cover aducanumab.

One notable change from the preliminary decision is the inclusion of people with Down syndrome in the CED. Another is that the decision was adjusted to state future monoclonal antibodies against the amyloid protein could achieve full coverage, if they demonstrate clinical efficacy in registration trials to achieve full FDA approval (aducanumab has mixed clinical efficacy data and was granted accelerated approval by the FDA).

What comes next? Time will tell what trials of aducanumab will be performed and covered by the CED. In the meantime, important Phase 3 trials of other monoclonal antibodies in people with Mild Cognitive Impairment and mild dementia are ongoing. Three major clinical trials are also testing monoclonal antibodies as potential disease-delaying or prevention therapies. This includes the AHEAD Study happening at UCI MIND.

UCI MIND is actively recruiting for a variety of research participation opportunities for older adults with and without memory concerns. To learn more, call 949.824.0008, email research@mind.uci.edu, or visit mind.uci.edu/research-studies today! 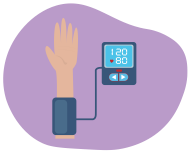 UCI MIND Faculty member and Associate Professor of Psychological Sciences, Dr. Daniel Nation, together with Isabel Sible, a graduate student from USC, published an article in Neurology in April showing a link between blood pressure (BP) variability (or the change in BP measured from one visit to the next) and changes Alzheimer’s disease biomarkers. Their work leveraged previously collected data from the NIH funded Alzheimer’s Disease Neuroimaging Initiative (ADNI) study. Dr. Nation showed that in cognitively unimpaired or mildly impaired individuals, higher blood pressure variability measured over the course of a year was correlated to an increase in AD pathology measured in cerebrospinal fluid. Furthermore, APOE ε4 carriers with high BP variability showed the greatest increase in tau biomarkers over the same time period. These data add to growing evidence that cardiometabolic health is closely tied to Alzheimer’s disease dementia.

Early this summer, UCI MIND plans to launch a new study for people aged 50-89 years old who have been diagnosed with Mild Cognitive Impairment.  VIVA-MIND is a phase 2 clinical trial being conducted at several sites around the US by Vivoryon Therapeutics and a grant from the National Institutes of Health. The study is designed to determine if an investigational drug named varoglutamstat is safe and can stabilize or slow memory or thinking problems that increase in Alzheimer’s disease by inhibiting a specific amyloid protein implicated in Alzheimer’s called N3pE. Participation in the study will last approximately 20 months and will include thinking and memory tests, EKGs, blood and cerebrospinal fluid collection and magnetic resonance imaging (MRI) scans. Dr. Steven Tam will lead the efforts to complete the study at UCI MIND. 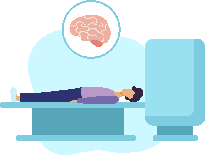 Davis Woodworth, a postdoctoral scholar in Dr. Ahmad Sajjadi’s lab recently published a paper in Brain Communications that highlights the transdisciplinary and collaborative spirit of UCI MIND. Together with UCI MIND faculty members, Drs. Mari Perez-Rosendahl, Maria Corrada and Claudia Kawas, Drs. Woodworth and Sajjadi explored the relationship between cognition, neuropathology (e.g. Aβ plaques) and regional brain volume using data from the ADNI study and the National Alzheimer’s Coordinating Center. The authors found that dementia was more closely associated with gray matter density in the medial temporal lobe as measured on MRI than most markers of neuropathology including neuritic plaques, neurofibrillary tangles, lewy bodies, cerebral amyloid angiopathy, and atherosclerosis.  These data support a role for MRI in the clinical diagnostic process. 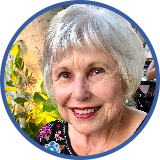 In addition to being a fierce philanthropic supporter of UCI MIND, Mrs. Karen Speros is a participant in the Alzheimer’s Disease Research Center (ADRC) Longitudinal Cohort. Karen became familiar with UCI MIND after noticing cognitive changes in her husband, Bill. She brought him to UCI MIND to get a diagnosis and learn about research in the early 2000’s, where she met Drs. Malcom Dick, Cordula Dick-Muehlke and Claudia Kawas. “This is how I met my three heroes. Talking about this disease clinically was the only way I got through it,” says Karen.

Bill passed away in 2008 but Karen continued to support UCI MIND and decided a few years later that it was time to join the longitudinal cohort herself. The research program, which has been in existence for over 30 years, involves yearly evaluations that include cognitive and neurological assessments and interviews with a study partner. In addition, participants also agree to brain donation at death, and various procedures to collect AD biomarkers.

The purpose of the study is to understand how normal aging processes differ from dementia over time. Data collected in the study is pooled with similar data collected from over 30 other ADRC’s across the country to allow researchers worldwide to study Alzheimer’s disease. For Karen, it is about the staff; the wisdom and loving care she experienced during her journey with Bill helped her to make the decision to become a research hero.

When asked why she contributes in so many ways to UCI MIND, Karen says, “My granddaughters! Both of their grandfathers and one grandmother have had dementia. So that’s three for four for two granddaughters. I’ll do anything to save them.”

UCI MIND is actively recruiting for this study! 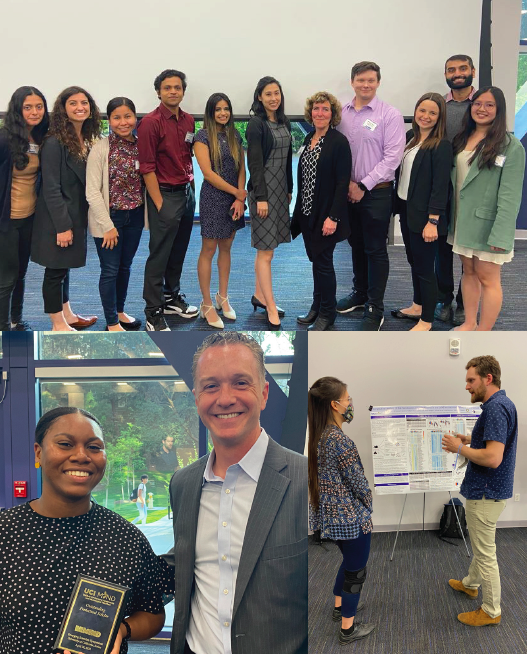 The event was held in person for the first time since 2020 and included invited talks from several outstanding pre- and postdoctoral scholars, followed by a lively poster session and competition. The event featured a keynote presentation by Dr. Cynthia Lemere from the Ann Romney Center for Neurologic Diseases at Brigham and Women’s Hospital and Harvard Medical School titled, “Using Mouse Models to Ask Old Questions About the Role of Complement in Alzheimer’s Disease.”

The event concluded with the announcing of poster competition awardees including predoctoral scholar, Alyssa Rodriguez in Dr. Marcelo Wood’s lab and postdoctoral fellow, Dr. Sage Dunham in the lab of Dr. Katrine Whiteson.

To learn more about this program, visit mind.uci.edu/team/REMIND 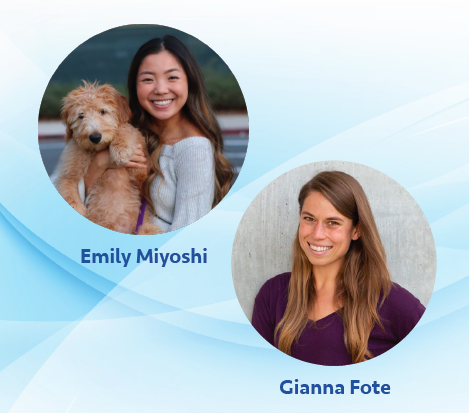 What’s new in Spotlight on Care 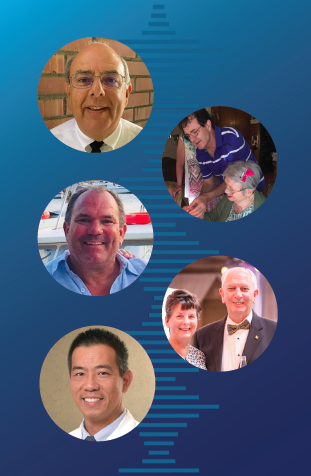 Spotlight on Care, the podcast for dementia caregivers, celebrated its one-year anniversary. Twenty-two episodes and over 3000 downloads later, co-hosts Steve O’Leary and Virginia Naeve continue to interview guests with a myriad of unique perspectives, including book authors, experts in elder law, and clinicians.

In episode 15, Stephen Magro is interviewed about issues like establishing advanced health care directives for loved-ones diagnosed with dementia. In episode 17, David Wilke describes his emotional experience caring for his wife with early-onset dementia while raising his teenage daughters. Mark Wilson returns for a second interview in episode 19 to provide tips on creating a safe living space at home. Longtime friend and UCI MIND advocate, Roger Lisabeth is interviewed in episode 20 about his experience in end-of-life planning for his dear wife, Lucy. In episode 21, UCI Senior Health geriatrician and UCI MIND researcher Dr. Steven Tam joins the show to discuss early Alzheimer’s symptoms to watch for.

To listen to these episodes and others in the Spotlight on Care library, visit mind.uci.edu/podcast or find us on your favorite podcast app. 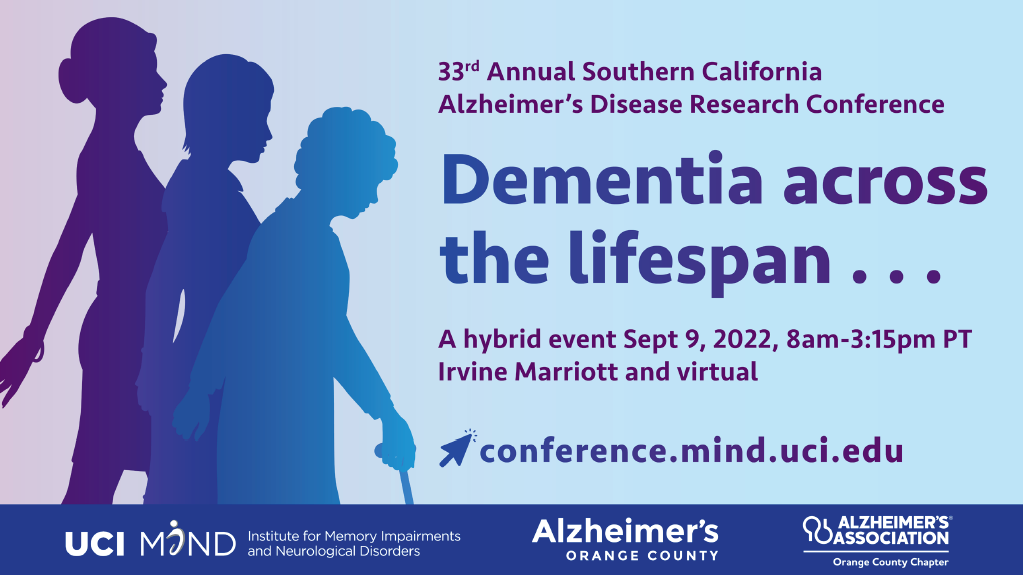 Dementia across the lifespan

Past educational sessions are archived on UCI MINDcast and YouTube 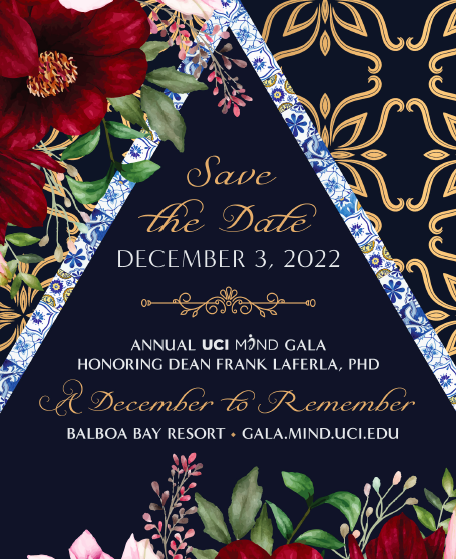