By KirstenOctober 27, 2022Commentary, Community Events, COVID-19, In the News, Participants
No Comments

Message from the Director

We hope that you had a summer full of sun, fun, and good health. As you can see in this issue of MIND Matters, it has been a busy summer here at UCI MIND. Our investigators played a prominent role at the annual Alzheimer’s Association International Conference (AAIC), a focus of this issue (p 1, 3, 6, and 7). We’re very proud of our own Maria Corrada, ScD, who played a role in planning this important meeting (p 1 and 7), as well as the many researchers who presented their work. As always, the meeting drew numerous headlines (p 3), as the world is hungry for information about ways to lower risk for dementia and treatments that can successfully combat disease.

The summer also saw headlines of a less positive nature, when Science magazine published “Blots on a field,” an exposé into the alleged scientific misconduct of Alzheimer’s investigators in New York and Minnesota. If true, the behaviors of these investigators are inexcusable. But the media’s reaction to the story was overblown, and suggestions that these actions significantly slowed progress in the field were incorrect. Indeed, just before sending this newsletter to print, we received word of the positive topline results from a Phase 3 clinical trial in early Alzheimer’s disease of lecanemab, a monoclonal antibody against the amyloid beta protein. These results are further evidence of progress in the field and that we are on the right track.

Even with this major advance, however, there is substantial work left to be done to achieve our mission. We are grateful to have the support of so many in the local community, such as Harriet Harris, Bruce and Kiersten Allen, and Michael Chang (p 4 and 5). We hope you too may consider joining us at UCI MIND’s signature annual fundraising event, A December to Remember Gala (p 5). 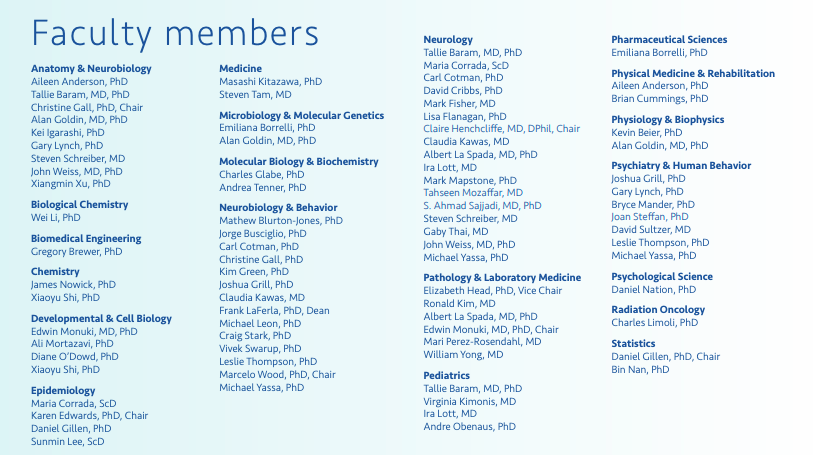 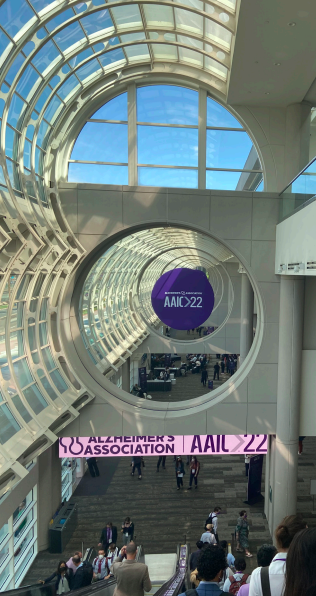 The San Diego Convention Center was bathed in purple in early August for the annual Alzheimer’s Association International Conference, or AAIC. The conference drew thousands of investigators from around the world to share and learn about the latest advances in the field. Several dozen faculty, trainees, and staff from UCI MIND attended the event either in person or virtually, many presenting their latest work. Topics that dominated the conference this year included neuroimaging, biomarker discovery, and inclusion of underrepresented groups in clinical research. The conference also gave researchers, particularly trainees, the opportunity to network and collaborate with others in the field.

This year’s conference included research talks ranging from lightening presentations to plenary lectures that were broad and given to audiences of 1000 or more on topics ranging from the implications of apathy to homelessness in dementia research and care. Hundreds of investigators presented posters of their latest findings. Eleven faculty members and graduate students from UCI MIND gave oral presentations while more than 35 UCI MIND staff, graduate students, and faculty presented posters. UCI MIND investigator and Professor of Neurology and Epidemiology, Maria Corrada, ScD, served on the planning committee for the massive gathering of researchers, clinicians, and advocates.

Given its size and notoriety, AAIC is a meeting where researchers often share results from clinical trials and other newsworthy research studies. This year, several talks garnered the attention of the media. Here are just a few of the highlights: 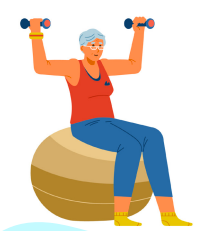 Much awaited topline results were presented for the EXERT study, a clinical trial of guided exercise in people with Mild Cognitive Impairment (MCI), for which UCI MIND was a trial site and Carl Cotman, PhD, was co-principal investigator. Unfortunately, the study failed to demonstrate a benefit of aerobic exercise in slowing cognitive decline compared to stretching. The study investigators were intrigued, however, by a comparison of the groups in EXERT to similar participants in the Alzheimer’s Disease Neuroimaging Initiative (ADNI), which suggested that disease progression may have been slower in EXERT participants. Combined with open questions about exercise modality, duration, and intensity, these analyses signal the need for better understanding of the effects of physical activity in people with MCI. 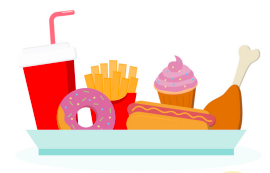 Investigators from the University of Sao Paulo Medical School in Brazil shared results from a large longitudinal study examining dietary habits and cognitive decline.  Specifically, the group found that intake of ultra-processed foods, often rich in added fats and sugars, were associated with global cognitive decline and decline in executive function over an 8-year period.  While certainly not definitive, the data suggest maintaining a diet low in processed foods may be an important component of steps to protect against cognitive decline. 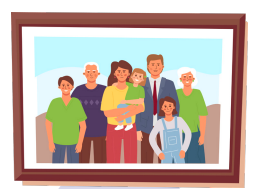 Topline results were presented from a clinical trial of the monoclonal antibody crenezumab in pre-symptomatic autosomal dominant Alzheimer’s disease, a rare, purely genetic and early onset form of the disease. Individuals who inherit gene mutations from parents with this form of the disease are destined to develop it themselves. One of the trial’s principal investigators who presented at AAIC was also one of the speakers for this year’s UCI MIND SoCal Alzheimer’s Disease Research Conference, Jessica Langbaum, PhD, from the Banner Alzheimer’s Institute.  The overall results from the study did not show a clinically significant benefit of the drug in participants, who were from one of the largest kindreds of autosomal dominant disease in Columbia, South America. Important trends in the biomarker and cognitive data, however, may suggest that more studies of crenezumab are warranted.

Evening on the Peninsula 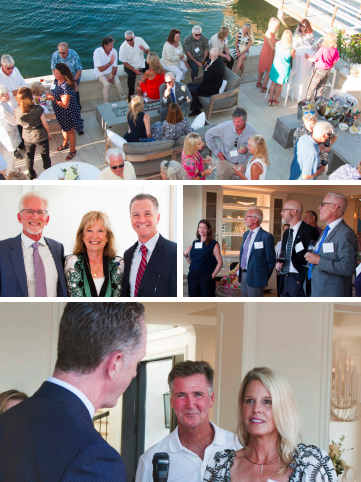 UCI MIND, in conjunction with Harriet Harris and the Living Large Legacy, hosted an Evening on the Peninsula at Bruce and Kiersten Allen’s home on Thursday August 11, 2022.

The reception gathered influential members of the Orange County community, with the goal of increasing awareness of the personal, public health, and local impact of Alzheimer’s disease and other dementias. UCI MIND investigators engaged in a lively question and answer session, amid sea breeze and a spectacular Newport Harbor sunset. With over 70 people in attendance, discussions exchanged were about laboratory and clinical research and the urgent need for accelerated progress.

The reception concluded with a call to action, with UCI MIND Leadership Council member Harriet Harris imploring those in attendance to support research, learn more about UCI MIND, and share these needs with their individual networks. The evening would not have been a success without a highly motivated and effective planning committee: Kiersten Allen, Sharon McLaughlin, Harriet Harris, Jennifer Taylor, Teri Elliott, Carole Harris, and Tara Shapiro. 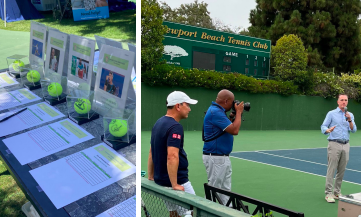 The Michael Chang Foundation held their annual 3-day tennis tournament on July 22nd – 24th. Michael Chang personally selected UCI MIND as the beneficiary for this year’s event. The exciting weekend featured large tournaments that allowed UCI MIND to share our work with the community and expose new audiences to our research mission. The final day of the tournament concluded with celebrity exhibition matches featuring Michael Chang, his daughter Lani (who is ranked for under 12), and James Blake, among others. At the break of the main celebrity exhibition match, UCI MIND Director Joshua Grill, PhD, was able to share more about UCI MIND’s mission from center court.

A December to Remember Gala is back! In-person! 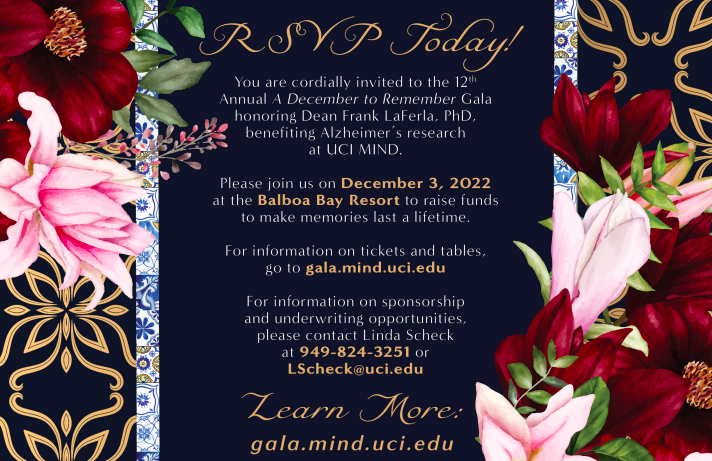 Investigators from the 90+ Study were heavily featured at AAIC this year. Maria Corrada, ScD, an epidemiologist and co-principal investigator (co-PI) for the 90+ Study presented neuroimaging findings from a first-of-its kind ethnically diverse cohort study of individuals 90 and older, the Life After 90 Study. Though few conclusions could be made, the data available suggested that, on average, Black individuals have the lowest amyloid burden but highest white matter hyperintensity (WMH) volume while Latino individuals have the highest average amyloid burden and lower WMH volumes. Until now, neuroimaging investigations in ethnoracially diverse oldest-old individuals has been extremely limited. The novel work presented at AAIC will help researchers understand contributors to the observed racial/ethnic disparities in rates of dementia and Alzheimer’s.

Ahmad Sajjadi, MD, PhD, a neurologist and UCI MIND faculty member presented results from participants in the 90+ Study on a newly described form of dementia called limbic predominant age related TDP-43 encephalopathy (LATE).  Dr. Sajjadi showed that half of all subjects from the 90+ Study with dementia who came to autopsy showed LATE pathology and while there were very few differences in the clinical presentation of people diagnosed at autopsy with LATE vs. those with Alzheimer’s disease, impairments in orientation may distinguish the two diseases in this population.

Staff members from the 90+ Study, like Zarui Melikyan, PhD, presented posters virtually on the link between sleep duration and Alzheimer’s disease pathology in the oldest old. 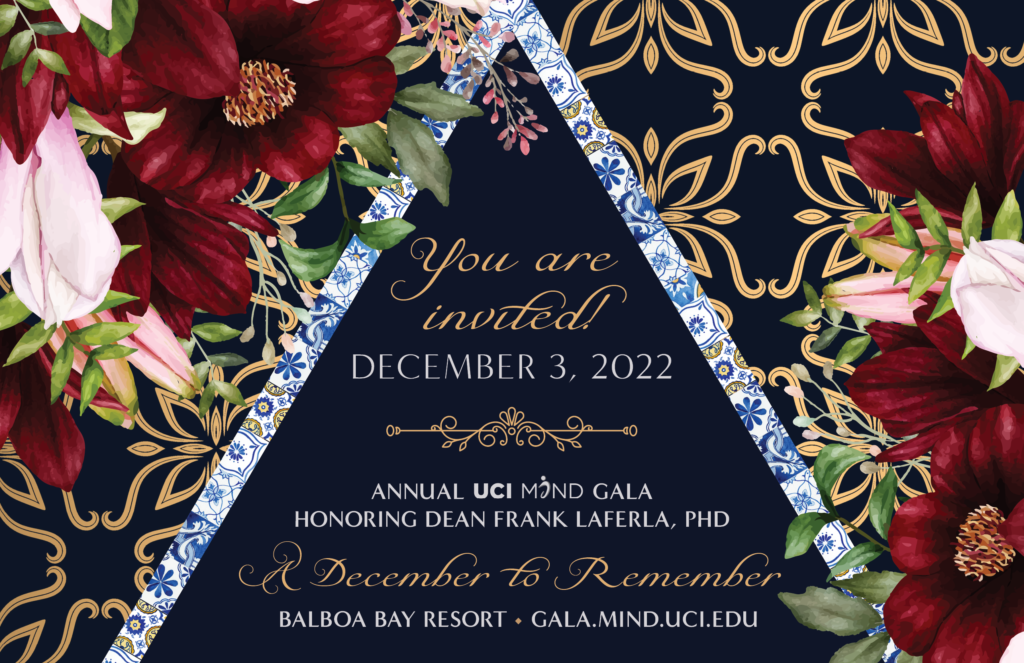 Past educational sessions are archived on UCI MINDcast and YouTube